“Ah! Uma écologista!” says the woman in front of me when I tell the cashier in my best Portuguese that I don’t need a plastic bag for my oranges.  I just give them a smile. Talking about ecology in a language that I don’t master, is not what I look forward to. I feel more like cooking now. And yes, vegan. How snobby of me.

Bananas in a plastic bag
But then the client tells the cashier (and friend) that it would be better to have some paper bags here. Moments before, the both of them were having fun quarrelling about nothing but now the cashier— who happens to be the owner — looks a bit troubled. “ Paper bags have plastic in it as well,” she replies in her defence. I keep quiet. They quarrel in Portuguese and I hardly understand anything, except that the client stepped forward in my advantage, the advantage of the ecologists. The owner doesn’t look like she feels like investing in ecologia. Same old story. She is two seconds away from telling me I am naïve. The lady behind me examines me while the cashier puts a bunch of bananas in a plastic bag that goes in a second plastic bag. I just play cool but the woman in front of me feels like she has to introduce herself. Her name is Aura Maria. “I live in Cannes with my husband,” she confides in me like we are two conspirators. “Portuguese don’t care, they have a dirty nature. I always step up when people throw garbage out of the car window !”
We switch to French and I ask her why Portuguese are so indifferent about garbage. Because they have such low wages? Taking care of nature is not a priority?
“Menteurs!” she says. “A person that says he can’t separate his garbage because he is poor is a liar!”
I am surprised by her reaction but an old, Portuguese friend of mine who lives more inland said something similar.
“I have raised two children all by myself, and they know exactly what is right from wrong!” she proclaims in Portuguese for the whole frutaria.
“Education then?”
“Peut-être.”
I feel the ironic glance of the owner burning in our direction while she puts another bunch of bananas in a plastic bag that disappears in another plastic bag.

I am eccentric
“You know,” Aura Maria says, “Fifteen years ago people didn’t leave or throw their rubbish in the dunes or on the street. It’s only recently since people stopped caring.”
“How is that?”
Like Portuguese tend to do, she smiles uncomfortably, shrugs her shoulders and turns her head to the owner to have a talk with her. Another bunch of bananas disappears in a plastic bag. It’s almost slapstick. They are talking about Switzerland, where you can get a fine for tossing your gum or cigarette on the pavement. The idea of it goes over the owner’s head but she seems to agree that a fine is a good idea (probably to keep me, a regular customer, satisfied). I sometimes practise my Portuguese with her. She says that from all her customers only three or four people do it my way. I am eccentric. I check Aura Maria’s groceries. All separate in plastic bags, gathered in more plastic bags… Habits. 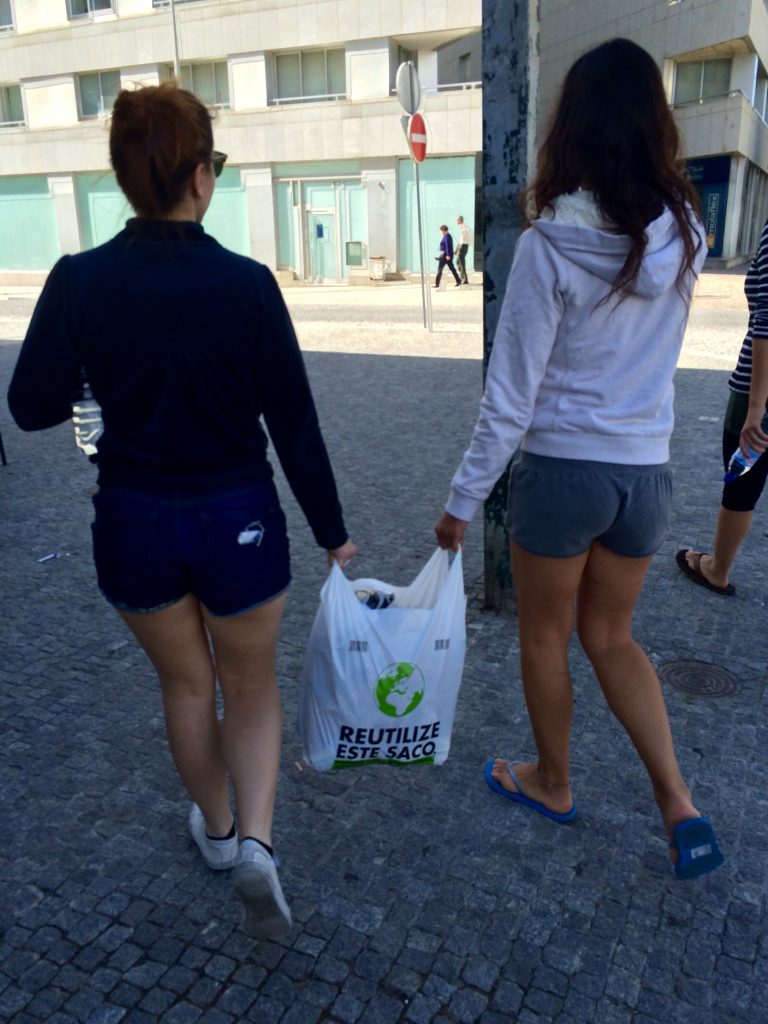 A bag full of shit
Reutilize este saco. That is written on every plastic bag that leaves the supermarket. I never saw anyone arriving with reused plastic bags. Everybody asks a new one. slapstick. Aura Maria reuses them, she says. I only understand half of it but she uses those bags to collect the faeces from an old, incontinent man she takes care of. To keep the smell away until she can throw it in the garbage. “And people also use it to clean their dog’s shit.”  The way I see it now is that Portuguese supermarkets are poop bag dealers. (almost) free of charge. The owner must have the same in mind: she starts laughing for the whole shop. Portuguese are really good with mocking themselves. Everybody in the shop is paying attention to us now. I tell her that we want to organise a dia do plastico in Espinho and that some surf clubs are willing to help. That is not even a lie (although this Belgian écologista will have to take the initiative & only one surf club is already informed… -ish). The owner nods willingly. This time she seems to mean it. Also, Aura Maria likes the idea. “ Because nothing ever happens here. Except for in Lisbon. They have the money for it, we don’t.”