I finally have what I want so there are no more excuses left for not working hard. With freedom comes a lot of responsibility. After two and a half years in Portugal, things need to change. Letting go of western assumptions & focusing on getting things done in my life.

The first assumption was money. Writing on a manuscript every damn day and still feeling lazy. Where did this come from? Well, we can blame Adam Smith for it. He declared that human nature is lazy and that we can only shift to ‘work mode’ if people get rewarded for it. A whole economic system was built on this idea. In the meantime, we know that human nature actually does look for purpose/ understanding and that people are willing to work hard for it. But nevertheless, the economic rewarding system stayed (so it seems people work for money instead of a purpose). The thing is that the way we tend to see ourselves is actually established by society and its rules. So even when I consciously decided to stop working and start writing; my self-image was one of laziness. It took me a couple of years to accept that I didn’t have a lot of money on my account eventhough I made all the right choices. WEIRD!

And next, I read this quote of the fearless Maya Angelou: “Pursue the things you love doing and then do it so well that people can’t take their eyes off you.” Now that’s a beautiful idea to build a social or economical system on! I believe that there would be a lot more cabinet makers, geologists, bar owners, small shops, craftsmen, sociologists, philosophers, aid workers, musicians, chefs,… and so on if society would live by this idea: People lucky enough to do the job they love doing are motivated to get better, to do it well, to engage instead of focusing on the reward: money. But that’s not the case here; we live in an anti-social and very money driven society where worker bees choose big rewards over self-improvement. It leads to people not being engaged with their jobs because money is a very impersonal material to pursue.
But not me, NO, I escaped all of that shizzle, remember? I will write because that is meaningful! And when I finally live in a Portuguese Quinta with a forest as a backyard, words will come automatically! Right??

What does that actually mean? Doing things well? According to the digital guru’s it means: don’t give in on your impulses, take priorities, keep in touch with your goal, get out of your comfort zone, and work hard. That’s it, lol!
But this is what really got me interested: our brain consists of three brains. The oldest reptilian brain is where our survival skills and intuition rule.  Next, we have our limbic part which all mammals have and emotions & social hierarchy is developed. And then there is the neocortex, which only humans have, and the youngest part of the brain, where rational thinking evolves. In that regard, we are all over aged crocodiles because the reptilian brain controls the neocortex. Territory, mating, fleeing and fighting all find common ground here. Here is a funny video that explains it.
E.x. I want to write well so people can’t take their eyes off me. But in order to do so, I have to read a lot, practice my style, find someone maybe to refresh the structure of  Dutch language.  Subject complement, what?! Oh yes, and write every day, I tend to forget that part. Because once I want to start, the reptilian brain tells me I am in danger: “ Are you crazy?? You’ll be rejected! Identity crisis on its way! Being vulnerable is not a strength, it means you’ll be eaten alive! You stupid woman, hide! Play dead! 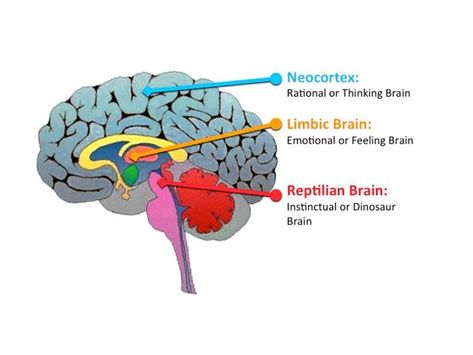 So before I start writing I’ll need to overrule this reptilian brain. Fuck me, how am I supposed to beat something that already exists millions of years ánd controls all of my subconscious acts??! Well, that is where taking conscious decisions comes in. Choosing what is right for me versus an ignorant crocodile that doesn’t understand modern life.
That’s what I am doing since Christmas: Making conscious choices that are good for me. I wake up in a cold house and put on the fire, practice yoga for one hour and meditate, prep a healthy breakfast, clean the house and start researching or blog. We leave chips (not good) and we prepare a meal plan for the whole week (good). Once a month we drive to the zero waste shop in Porto and refill our bags & pots with food and cleaning products¹. Instead of television (not good), we try to read, puzzle together, sport, brainstorm about our property, chop wood, try new dishes,… Try new routines (good). Last week I got rid of the Facebook app on my phone (very good!). It takes effort but after almost two months that effort became more or less a habit.  When most people break with their New Years resolution’s that’s often the tipping point to continue.  Where the magic happens. I notice more strength & flexibility in my yoga asana’s, my skin & eyes look healthy, my moods are better and the house is cleaner. The job gets done² (so far).

Or not? Because it distracts me of what is most important to me: finishing that book. That crazy old fart of a crocodile tricked me again. That is where- for me, prioritizing/ meditation comes in. It keeps me focused (hello reptilian brain, I can see you now!) on my choices. But my manuscript still comfortably lays in a box in the closet surrounded by notebooks, research and inspirational stuff. It’s time to take it out, to rewrite and send it to the editors. It got refused the first time so it needs to be better, to be well enough so the editors can’t take their eyes off me.  Routines help. And role models like Maya Angelou: “I believe that the most important single thing, beyond discipline and creativity, is daring. To dare.”  Having the balls to finish what you started or just start all over. The rest is out of my control and that’s okay. That’s freedom: accomplishment, acceptance & letting go. I have no idea what 2019 will bring but at least I am evolving and working for it. Learning by trial and error & living consciously every day.  Until the day I die.