A day with our friends at Matosinhos, the surfspot of Porto. We surf & talk about what changed in our lives since we moved. I try to read, and play something with a three year old that looks like football. After the surf, in the late afternoon we are quite hungry and the women (ha!) decide to walk to the supermarket to buy some well-earned food for the starving champions. We stop at a red light and Susana starts laughing out loud, pointing at the walking man of the red light: “It’s red only for the men so we can cross over!” She starts laughing even more. “ Really, when I lived in Germany everybody just stopped at the red light not because there was so much traffic, but because the red light ordered so.” She shrugs her shoulders. “I mean, EVERYBODY stopped, it was full of people next to me… And the street was empty of cars! A nine year old Berliner got angry with me because I crossed the street anyway, haha!”

Susana happens to be my yoga teacher and I got really fond of her in a short period of time. She teaches like the old masters, forces you to think things through. Sometimes with a mental beating, more often with good sense of humor. Last week she explained that we live in a male dominated way of analysing our environment while the female way is more intuitive (this is not about feminism, as man obviously have intuition as well, or woman can be very rational. It’s about the balance between both). Intuition is often overseen because of fear. Fear blocks our intuition. The same happens with doubt. Doubting is like losing your faith in what you are able to perceive. And a third reason that blocks our intuition is having preconceived ideas & thoughts. Afterwards it’s really hard to see things lucid (more about that in a next post). And that’s really sad. Your intuition, after all, is about putting trust in what you believe.

Moving to the South of Europe made me realize how we always think things through. How over efficient we are or upset when things not happen in a correct or fluent way. When I fly back to Belgium it’s often the Belgians who are complaining about not being on time, the lack of service on board, that the seats in the back are too small… “A NIP test will soon be free for all pregnant women in Belgium so we can detect and hopefully extinct Down Syndrome,” a Belgian professor in Moral Philosophy says motionless. How efficient.
Well this is what I tell myself: Life isn’t preconceived & ordered, so Sophie, don’t get upset because someone jumps in front of your queue, closes his shop or doesn’t appear on your dinner party for no reason or doesn’t use their flashing light to make a turn (Portuguese have a VERY intuitive way of driving). Because you know what Sophie: It’s ok. Here you have to take life as it comes. Not analyse it. If you want to move forward with the Portuguese don’t think too much ahead but be in the moment. We are the stupid ones thinking & stressing about the future instead of enjoying the momentum. Portuguese share their fresh fish or home grown vegetables with neighbours & friends. Belgians keep it for later or try to sell it. Create a business plan for it. Saving & investing money doesn’t necessarily generate a rich life… Life hardly goes the way you expect.

So since short I park my car where I have space and not in between the lines (that took me a while to acceptJ) and I don’t even TRY to be on time (it’s quite liberating, people just show up when they are ready for it). When I want to meet someone, I call two hours in advance not three days before and I laugh out loud when a ninety year old hits the highway at 20 miles per hour. Texting or mailing with Portuguese is also a kind of intuition. Not replying, often means they silently accept. I think. Even with the bank or the imobilária. I hope. 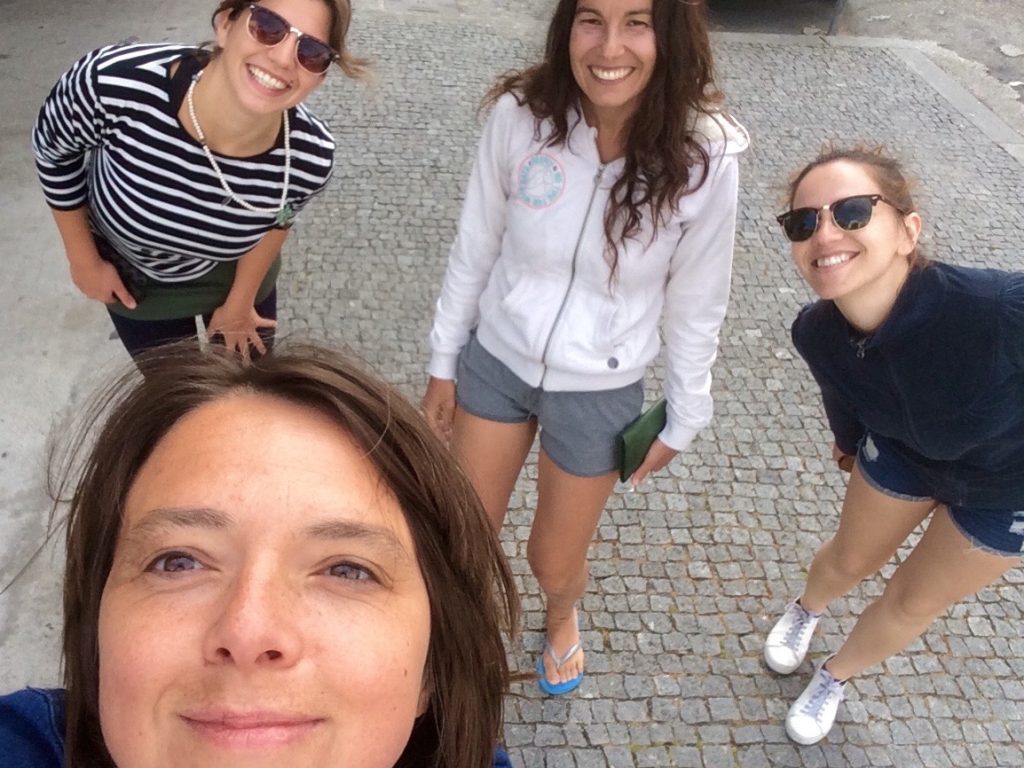 And now back to me and the girls heading to the supermarket in Matosinhos. While they are in the Padaria (bakery) I am thinking whether or not I’ll grab some beer for all of us or just for Davy and me. Davy is the only vegan so are we going to share his food, and if so are we going to share the bill or is everybody just buying their own food? At some point I stop overthinking it and just buy what we like: hummus, cheese, tomatoes, seaweed, toast, six beers & water, and see what happens. At the cash deck I install my groceries on the moving band and Gizela takes the water while Angela puts two of my six beers & the seaweed in her basket. “Good idea! I can share this with you,” they both say.

Easy peasy. I start to feel a bit smarter already.